Move-out week is one of the busiest weeks in Oxford. Many students leave Oxford during the summer, and simply cannot take everything with them. Much of the trash standing along the streets during move-out week includes items that can be reused. 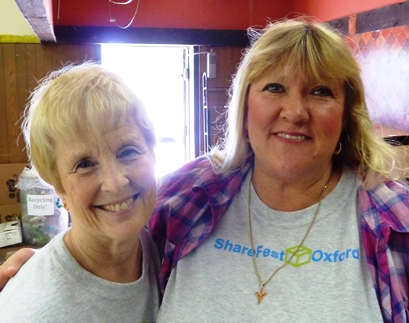 In early 2005, a small group of concerned citizens, City staff and service organization members founded ShareFest to collect such items. Collection of items prevents waste and promotes cleanliness. Best of all, it helps people in-need.

In some cases, families were able to fill entire homes with items such as couches, dressers, desks and kitchen tables. In addition, many teenagers received high-quality clothing items. Items are distributed by organizations such as the Family Resource Center, Butler County Children Services and Lighthouse Food Pantry, in addition to many other participating agencies.

In 2010, the ShareFest Committee allowed agencies to sell the collected items, as long as the proceeds benefit their clients.

In 2017, the ShareFest collaboration between the Oxford community, nonprofit organizations, businesses, and Miami University continued to grow. ShareFest 2017 benefited seven recipient groups, and collected a record 87 tons of donations.